If you’re familiar with my blog then you know how much I love to travel. And in 2019 I took a couple trips and made so many memories. My two most recent trips are quite different in the topography and location, as well as time of year when we traveled. We visited Alaska for the first time and returned to the Washington Coast, which is one of our favorite places to visit.

Over the summer we went on an Alaskan cruise. A trip to The Frontier State has been on my bucket list forever, and I wasn’t disappointed.

I went to Alaska looking for the wilderness. I wanted to touch a piece of that roughness, the unexplored, the wildness. Traveling there has been on my wish list for years. I can’t even remember when the curiosity about Alaska began.

Was it when I got hooked on the loosely-based-on-reality-tv show Yukon Men, about men and their families and how they survive in the Alaskan bush country of Tanana?

No, it might’ve been before that. Back when I’d heard of Christopher McCandless and his deadly solo trek into the wilderness when the book Into the Wild hit peak popularity in 2007 when I was a cashier at Borders?

Was it before that? In childhood when I watched the movie adaptation of Jack London’s  classic White Fang?

All I can say for certain is that before our trip I checked out as many books on Alaska as I could. I read fiction about a family trying to make it in the Alaskan bush. I read non-fiction about the countless people who’ve gone to Alaska for short expeditions, and to stay. These people went there to find themselves, to prove something, to capture that untamed essence that exists only in Alaska. Those people went in the hopes that they could bring the smallest piece of that back when they returned home.

Thinking of these stories of the people who’d gone before me and the countless others whose stories I don’t know, I wondered about my own quest.

Was it to create stillness inside myself? To reach into the deepest part of me and find untapped reserves of grit? Was it just a journey of self-discovery? We visited Alaska just before my fortieth birthday and I do think there was an aspect of looking inside myself that happened on that trip.

There were little bits of it throughout the trip, but the crux of the experience happened when I was standing at the back of the boat when we sailed through a fjord leaving Skagway. That was the epitome of what I hoped to experience in Alaska.

As I stood there, I was in awe. It was after sunset (nearing 10 p.m.) yet the ambient light made it appear like it was afternoon. And everything that I’d read about Alaska, everything I’d ever heard, the myth and majesty of the place, was distilled in that moment.

The air was fresh and had a sort of softness to it against my skin that I can’t fully describe. There was quiet. So much quiet. There was a stillness that seemed unreal, given the time and place where I was: on a massive cruise ship, living in the era of electronic devices and 24/7 connection. There were no other ships around in the fjord, there was just this immense solitude. As we sailed through the fjord, enveloped by scenery so large and dramatic that it absorbed any sound, I turned my attention to the back of the boat.

One lone seagull flew in our wake. It hovered there, above the water, until a second joined, then a third, and soon there were roughly twenty of the birds. As I watched them swooping, and moving full of grace, tears formed in my eyes. They brought me so much peace, just to watch them and knowing there were no other demands on my time, no other distractions. For that moment, I was as free as they were. For that blip in time, I was flying, too.

Thanksgiving weekend is typically a time where we pick a destination within a few hours travelling distance of us and spend a long weekend there. My husband worked retail for years and spent too many holidays working Thanksgiving day and Black Friday. Our yearly trips are a form of gratitude that our lives have changed for the better, along with a celebration that neither of us have to work holidays anymore.

This Thanksgiving we drove to the coast and spent four nights in Long Beach, WA. This small town is on a peninsula and touts itself as the “World’s Longest Beach.” Being that it’s on the southern tip of Washington, we took a day trip into Oregon, via the Astoria-Megler Bridge and spent a few hours discovering the craft breweries in Astoria, OR.

Astoria’s Museum of Whimsy. Not sure what happens here, but it sounds fun! 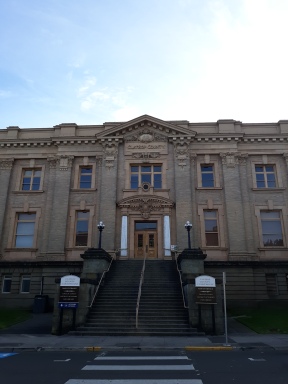 I love the architecture of old courthouses, like this one in downtown Astoria, OR.

Of course, I wish we could have spent more time in Astoria. This cute, quaint town is full of history and can boast many blockbuster movies having been filmed there, including The Goonies and Kindergarten Cop.

And not surprisingly writing inspiration struck during both of my trips. I dreamed up story ideas focused on the Klondike Gold Rush and another about a shipwreck off the dangerous coast near Ilwaco, WA. We’ll see if one, or both, ideas pan out into actual books. For now, I’m looking forward to our next adventure, when we return to Vancouver, BC next month and the experiences we’ll have, of course, and what travel writing stories that trip might inspire.